Hallam Promotion Push Back on Track with Victory Over Local Rivals! 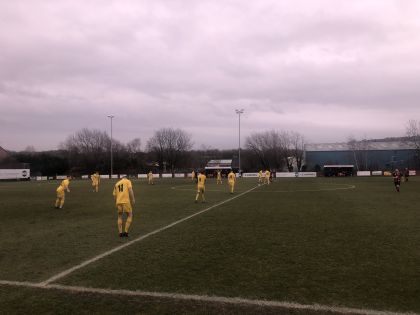 A good contingency of Countrymen made the short journey over the Derbyshire border to support Hallam FC playing away at local rivals Dronfield Town, a healthy crowd of 326 making their way inside the HE Barnes stadium. While other local games had fallen foul of water-logged pitches, the Dronfield Town ground staff had done a grand job, ensuring this NCEL Division One clash was never in doubt.

The crowd braced themselves against the elements, and looked to the players on the pitch to provide a distraction from the rain that threatened overhead. For the Hallam supporters, there was the added intrigue of how their team would recover from last week’s disappointment, which saw their six point lead at the top of the league cut back to just three points. The stage was set for a fascinating contest.

It did not take long for Hallam to claim first blood. On the 8th minute, Niall Smith’s cross was expertly put away by Hallam favourite Kieren Watson, and just a minute later Brandon Bradbury was unlucky to see his shot rebound back off the crossbar.

The rain may have been holding off, but the blustery conditions meant that this was never going to be a demonstration of fine footballing skills. Added to this mix was the fact that Hallam looked a little unsure and hurried in possession, a hangover from the previous week perhaps. However a clumsy challenge in the Dronfield box led to a Hallam penalty, expertly dispatched by the ever-reliable Liam Royles.

The Hallam supporters may have now been hoping that their team would settle and go on to an emphatic win. Those hopes were dashed in the last minute of the half when Danny Patterson was unlucky to turn the ball into his own net. Halftime, 2-1 to Hallam.

The rain continued to hold off, much to the relief of the huddled masses watching the game, and as the second half started, Hallam seemed to grow in confidence, producing some moments of great passing football. Liam Royles completed his brace on the 62nd minute with a wonderfully taken half-volley. 3-1 to Hallam and game over, surely?

Midway through the half, frustrations spilled over on the pitch, leading to several minutes of ‘handbags at dawn’, and on the 68th minute a further altercation led to the red card been shown and Dronfield reduced to ten men. Hallam dominated the play now, looking for a fourth goal, but the Dronfield defence held firm.

Despite Hallam controlling most of the possession, Dronfield still looked dangerous on the counter-attack, and in the dying moments of the game Dronfield’s Callum Mawbey produced the goal of the game, his long range shot hitting the back of the Hallam net like a bullet. But it was too little, too late and it was Hallam who emerged with all three points, maintaining their advantage at the top of the league. As the light faded and the night drew in, the travelling Countrymen made the journey back into South Yorkshire, secure in the knowledge that Hallam are still very much in the promotion driving seat. 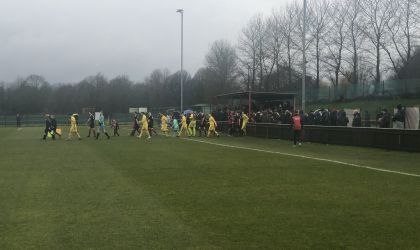 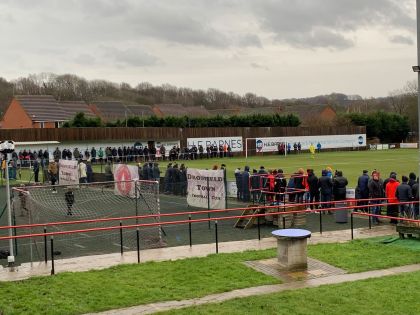