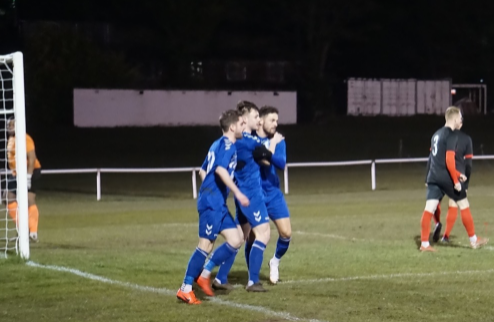 It’s at that point in the season for @HallamFC1860 when it doesn’t matter how they get three points as long as they do.

Which was just as well tonight. It had all started so well. More or less straight from the kick-off they moved the ball neatly around an Ollerton side who hadn’t woken up and allowed Bradbury to volley home.

To Ollerton’s credit, they sorted themselves out quickly and a period of high tempo running around to very little net effect followed.

In the absence of any real coherence, a moment of calm and focus was always likely to stand out and Royles managed one for Hallam after 18 minutes to give them what turned out to be a very valuable cushion. While there was the odd chance, the rest of a helter skelter half finished without either side taking control.

The second half was a bit of a less hectic affair with the sides cancelling each other out for most of it.

Each had a couple of chances, Patterson in particular seeing an unconvincing save from his edge-of-the-area effort dribble in slow motion just past the post. And then suddenly with 20 minutes left Ollerton pulled one back and the game descended into a broken, scrappy affair which was enough to see Hallam home.

They might not care how they get three points, but the next two games, Selby away and North Ferriby at home, are likely to be season-defining and they are going to have to do better to get through them intact.