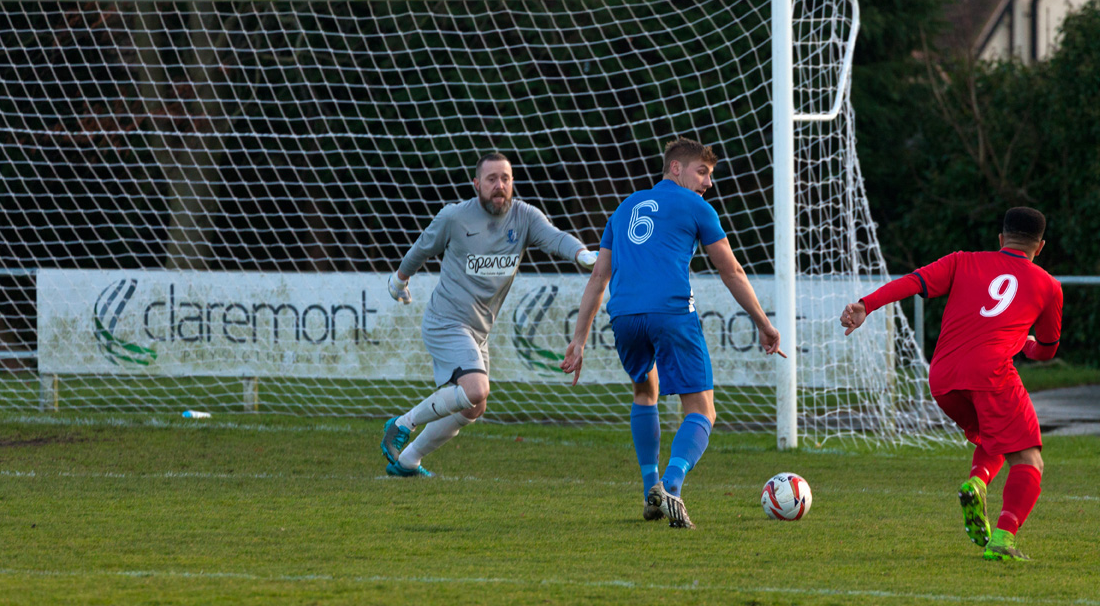 Rob Miller talks to Shotstopper Dave Darwent after Hallam's 3-0 victory over Swallownest. Discussing all things career related, views on the win and that astronomical performance in the reverse fixture.

Well Dave, we've heard Scott Bates views from on the touchline. What is your reaction to a fine 3-0 triumph from between the sticks?

A hard fought win in fairness. They are a good side Swallow' and fight for everything and 100% performers in all departments. I think 3-0 did flatter us a bit, however I do think we deserved the win. And on reflection, it's a big three points for us.

And you've repelled stiff competition from the likes of Archie Sneath and Josh Diggles to retain the number one Jersey at Hallam, how much as that motivated you to continue in strutting your stuff here?
Well, both Archie and Josh are good goalkeepers, and it's just nice to be picked as first choice keeper here. I suppose it's like anything else, you play well and thus keep your place. It's upto me to keep my standards high and keep that shirt for myself.

And of course, Swallownest away was the match your performance really stood out. Does it give you an extra push, performances like that?

It does, I'm 41 in the week and got to keep my standards high otherwise you loss your place. And especially at this level, you've got to perform and the squad we've got here, it's not just me, it goes through the team. Good players in all positions so if your " not on the ball " then you will not be starting, as simple as that.

And you've played for a variety of clubs Including Retford in the Evo-stick and Parkgate. How are you adapting to lower league football in contrast to them clubs?

Ive played in the NCEL previously. I had a spell at Staveley and this is my third stint at Hallam given that I first come up here as an 18 year old.  In my spell at Retford I was drafted in, what with Retford at the bottom of the Evo-stick at the time. Almost getting ' man of the match' every week given the pressure on us. It's a shame to see Retford's sudden decline and I really hope they pull clear of the bottom of this league. But no, I'm no stranger to the NCEL environment.

And how would you describe yourself as a player Dave?

Hmmm, tough one!! I'd like to think I can man my 'box'. I endeavour to come for crosses, and like to be vocal towards my back four. Otherwise, it's all good. I love playing for Hallam what with the good set of lads I play alongside so probably the best club I've played for in honesty..

And you mention that Hallam is the best club you've featured for so is there any best mates you've made here?

Nay, we all get on. Everything is sound in the dressing room. Everyone is bang on, there's nobody who thinks theyr'e something they're not. They are all good lads, the lot of them!

And where would you like to see Dave Darwent in two years time?

Hopefully still playing, since I've set myself a target for 45 before I retire. So another four seasons playing football I reckon. Injuries obviously permitting of course and we will see beyond that. I'm taking it one season at a time and still playing well. Once your done, your done aren't you? So keep performing and keep playing basically.

And despite the wholesale changes with the squad during the season, we've retained a majority of our defenders. How important is that, and that you retain a good understanding with the back Four?

Yes, it's vital. Of course, we had a massive shake-up in the summer with Ryan ( Hindley) moving onto Worksop so practically, it was a new team we had here. As I've said, I have a good understanding with my defence. Got some good characters in there so Yeah, it's all good.


And after today, are the playoffs still on track?