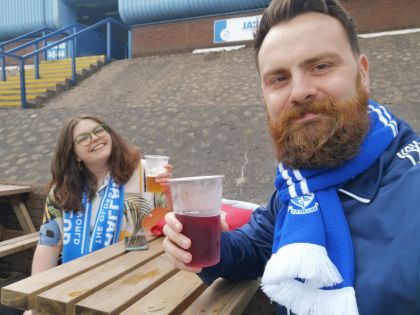 The next installment in our occassional 'Meet Your Fellow Countrymen' series. This time we talk to stadium announcer Chris and his partner Ceri, both regular faces at Sandygate and at away games.

Job (outside of Sandygate): We both work for the Department for Education

Where do you live: Sheffield, S11

Where are you originally from:

How long have you been visiting Sandygate: 5 years

How did you first hear about Hallam FC:

Ceri – brought along by Chris a few years ago, and very grateful for it.

Role at the club:

What is your choice of pre- match / half time snack from Ann’s cabin:

Ceri – Kit Kat and a Bovril!

Who do you attend games with:

The Shed End, but the whole club feels like a family now!

What would you say / recommend to a first time visitor to Sandygate:

If you’re after atmosphere, stand in the Shed End. If you want the best view, the main stand is the best place to be. Pasty and peas is immense, and the bar is brilliantly priced.

Where do you think Hallam FC will finish this season:

Ceri – I reckon a close 2nd

Get yourself up. It’s an amazing club with a great set of fans and volunteers. We’re arguably one of the best priced experiences, not just in football, but in South Yorkshire in general. And wear one more layer than you think you need in winter! WAHAW.