I’m John Wiseman 48 years old, I work as a Senior CRM Business Application Manager, which is just a flash title for a type of IT Consultant. My lad is Anthony (Ant) who is 11, he’s the one who is seen running about Sandygate in the Hallam top being here and there, fetching produce from Ann’s cabin for the video team and generally being “about”. 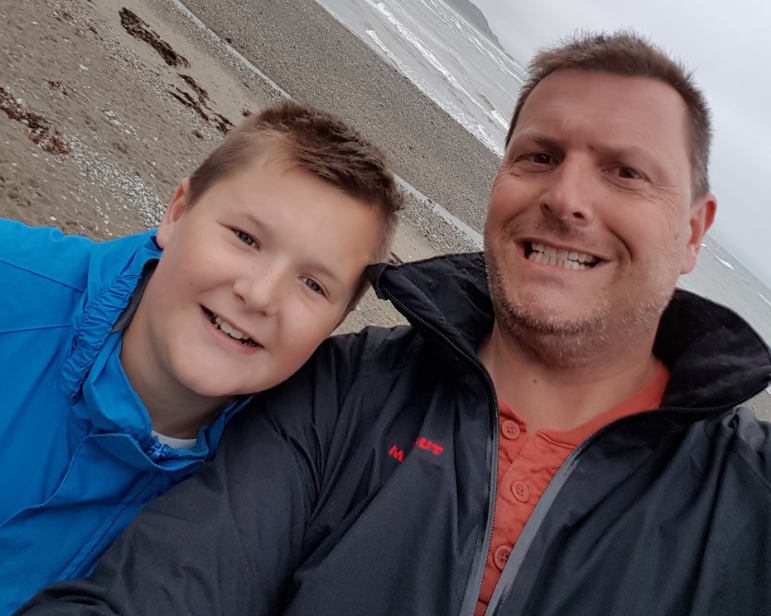 How did you first come to know about Hallam?

I move to Sheffield in 1995 and being nosy I went out walking a lot to learn my new local environment. I walked passed the ground quite a few times and didn’t really pick up of the sign saying “The World’s Oldest Football Ground”. It was during one walk that I read the sign and it sunk in, I was disbelieving at first so started to query it and research.

The thing that really surprised me was that Sheffield had this “world heritage” asset yet did not appear to promote it – In any other city in the world you would see tourist signs from 200 miles away directing you in towards it.

What was your first visit here?

Ha! that was funny, it was a random Saturday about 5 years ago – Hallam were playing Arnold Town and Ant was really getting into his football so it seemed a fitting time to introduce him to the beautiful game non-league style. We turned up really early just in case it got crowded but at kick off there was just us and only about 40 others. As the game commenced there was very little reactions from the crowd. We scored quite early on and whilst I jumped up the general reaction was a gentle round of applause, which didn’t really lift my senses.

Your role at the club?

Being in I.T. you can bring a lot without having to do too much. The first thing I wanted to tackle was keeping the website updated and current with news and reports. This has recently increased due to bringing Rob Miller on board who you will see with the Video camera.

Secondly, I edit and publish the match highlights to the Hallam YouTube site, this has gone well since we started and we have had over 3,000 views from only 5 matches. Thirdly, I produce the Hallam FC eNewsletter which goes out to the subscribers each month. Finally, I provide most of the noise from the back of the stand when our strikers are on fire.

Have either of you ever played or scored on the oldest pitch in the world?

Me no but Ant is usually on the pitch before and after the game, it’s better than jumpers for goal posts and I know where he is when I am having a pint.

Your favourite or stand out moments while supporting Hallam?

So many games to talk about but last year when we had Kieran Watson stands out. We were playing Campion and he scored an absolute stunner and, for the first time, I experienced the crowd going mad and this was a turning point from gentle applause to full on cheering. This has carried over to this year and the momentum is gaining.

Who do you go to the games with?

We bring various guests dependant on which of the other two Sheffield clubs are playing away. That can sometimes result in long extensions in the clubhouse afterwards, which my wonderfully understanding and tolerant wife has no issues with.

Favourite away ground you've visited and why?

We were at Swallownest a few months back, really enjoyed that game and mixing with the home fans who made us all very welcome.

Do you stand on the terrace or sit in the stand for the matches?

Back corner of the stand, where the players emerge from. It’s a great place to video the matches from as you can see “most” of the pitch from there.

Pasty from Ann's cabin or pint at half time?

Ann’s cabin but Ant is well trained and will obtain nourishment just before half-time, with the assumption he also gets something.

How many layers do you wear at a mid week home game in January?!

Loads but it’s irrelevant, I could be hot in the Antarctic with what I wear but with the wind blowing off the hills its character building cold in Sandygate on a Tuesday night in Winter.

Wednesday or United or other?

Ha! Anyone who talks to me will be aware I am not a native Yorkshireman. I come from the East End of London and my club from birth has been Leyton Orient, as is Ants. We have to be careful mind, the missus is a Blade.

If you was to encourage a first time visitor, what would you say?

Please come its great, if you love Football you will get it. Get a pint and a pie and sit in the stand, watch an entertaining match and be a part of our lovely community. Then come again and bring your family and a few mates and do the same.

Where do you expect Hallam to finish in the league this season?

I am hoping for playoffs. It was a slow start and now the team is settling and momentum is gaining my hopes are becoming more realistic.

It's so great to be a part of Hallam FC, the history, the players and the volunteers are amazing. I have a vision of where “the world’s oldest Football ground” should be in the annuals of Football history and little by little the focus will increase.