It was a tale of two second-half penalties for Hallam’s Under-19 side in Nottingham last Friday evening as they drew 1-1 with Basford United Under-19’s in their second game of the season. 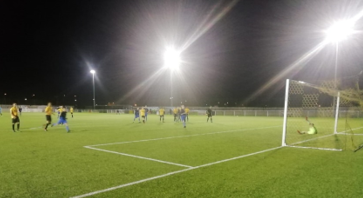 The Countrymen were a goal behind at the break, but a penalty from Allatt levelled the contest in the second half (pictured right) ; and Basford’s keeper denied the visitors a three point haul when he saved a second spot-kick shortly afterwards, to leave Manager Mick Khan ruing a series of missed chances , writes Ann Holland for the Hallam FC Website.

Mick told the Website “We started the game very well with good possession and control. We missed two early chances then from our corner they hit us on the break and scored. It was very sloppy from us again after 25 minutes of the first half. We controlled the rest of the half.

“After a few choice words, we went into the second half”

Mick deployed his motivational skills during his half-time team talk. “After a few choice words, we went into the second half” Mick reported. “Having told the lads to win the first ball we quickly got in behind them and got a penalty to make it 1-1. After more pressure we got a second penalty, but we missed to leave the final score at 1-1 .

“It was a very frustrating evening for me “Mick admitted “We dominated the second half with our keeper just spectating. We missed too many chances; but it was a very positive performance again against a good academy side”

“One that got away from my perspective tonight” Mick concluded.

Mick Khan was talking to the Hallam FC Website