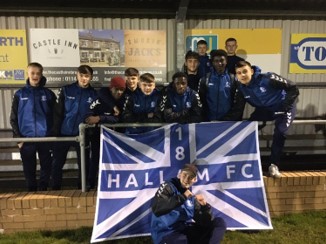 Hallam’s interest in the 2019/20 Sheffield and Hallamshire Senior Cup ended at the third round stage on Tuesday evening when the Countrymen were beaten - fair and square- 2-0 by in-form County Senior League side Swinton Athletic on a cold Sandygate evening, write Ian Jones and Glenn Poulton for the Hallam FC Website.

This was Hallam’s first competitive game since defeat at Campion at the beginning of November; Swinton’s last outing had been a 7-0 win over Jubilee Sports on the 16th of last month, so both sides will have been glad to get back into action.

The tie had been switched to S10, and the 91 crowd (including members of the Hallam Wisewood Under-18 squad) watched an uneventful first quarter of an hour. Stephen Whitehead had selected a mix of experience and youth for the game, and as the first half progressed, the home side started to impose themselves on the game. It was the visitors, whoever, who had the first real chance, forcing James Leverton into a fine save.

Half time came with the game deadlocked at 0-0, but the visitors -who are unbeaten and hold a single -point lead in their Division with games in hand on teams around them- were proving to be tough opponents for the NCEL side.

Into the second half, and Swinton took the lead five minutes in. A fine move down the right ended with the lively Enzo Guarini firing home at the back post-his seventh goal of the campaign. 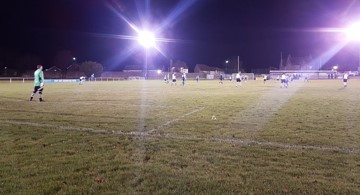 The home side battled to get back into the game, but the Swinton defence-superbly marshalled by their experienced skipper, former NCEL centre back Owen Fieldsend-held firm.

Stephen Whitehead rang the changes, bringing on Staniland ,Samuels and Khan, but it was the visitors who clinched a place in the Fourth Round with a beautifully-worked counter-attacking gaol, expertly finished by the prolific Justin Greenwood, his 23rd of the season with nine minutes to play.

Roared on by a small, but extremely vocal visiting support, Swinton saw out the added time to seal a fine victory.

Ian and Glenn caught up with an angry and exasperated Stephen Whitehead after the game, and there was a n ominous message from the gaffer to his beaten Countrymen.

Stephen, after a lengthy period of inactivity the players went down 2-0 to a good Swinton Athletic team in the Sheffield and Hallam Senior Cup on Tuesday. What's your assessment of that game?

I disagree with Swinton being good if I’m going to be totally honest. I thought we were very poor as we have been in our last three games. I’ve signed a couple of new players, who will be revealed soon; and with that, one or two will be on their way. No disrespect to the ones that will leave - I just think we need to get lads who want to play for the badge, and I’m not sure I have that at the minute.

We train on the all- weather at Warminster , at Goodwin’s and we also have the availability of John Fawkes’s Titan boxing gym , where he puts us a great conditioning session on.

On Saturday it's a cracking-looking local League derby away at Dronfield. It’s a management team and club you know well. What are you expecting at Stonelow Road?

I’m expecting it to be tough and our recent form says that Dronfield should be favourites to win. Stonelow is a tough place for me to go; as you will all know I have a lot of connections there and they will all be wanting to get one over on me, so I expect them to be fired up.

I just hope we get our lads up for the game; if not, then we may need our tin hats!!