After Micah Bishop had rattled the crossbar for the home side, Jordan Turner opened the scoring for Hallam after 14 minutes, and Turner doubled the Countrymen's advantage after the referee had played a good advantage after a ckear foul on Bishop just after the half hour; his 10 th goal in 4 games and 12th of the season.

Up 2-0 at the break, Hallam pushed for a third early in the second half and got their reward on 51 mins when Sam Smith converted to cap a superb all round display by the front man. 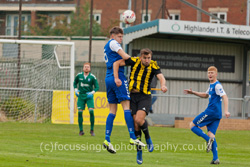 Always tough opponents, though, Nostell roared back into the contest through Rhys Meynell's 57th minute penalty and Calum Ward (73 minutes) to set up an exciting finish in which both sides had chances and Hallam's Julian Lawrence saw red for an off the field incident.

Hallam saw the game out however to clinch another three-point haul and delight Countrymen Manager Stephen Whitehead, who spoke to Ian and Glenn after the game.

Stephen, pick the bones out of that one for us. At two then three up you must have felt that the points were safe; but if anything it proves that Nostell are dangerous opponents at any time. Sum up the key incidents today.

We were comfortable at 3-0 and the lads had outplayed a very strong team. We then have to make a couple of forced changes and it took the lads who came on too long to get into the game. The ref then gifts them a penalty when you can see from our video highlights that it hits Jack in the chest. That then gives them a lift; they get another then it’s backs to the wall for us but we manage the game well and get the three points we deserved on the day.

The front men were again in super form with two more for Jordan and a man of the match show from Sam. Who else stood out for you today?

You have to be collectively good to beat the teams that are chasing the same objective as you are and Nostell will end in and around the promotion places ; so your team has to play well and you can’t have any passengers. Levo (Keeper James Leverton ) looked assured. The back four looked solid. The three in midfield worked their socks off and the three lads up top caused them all sorts of problems all afternoon. 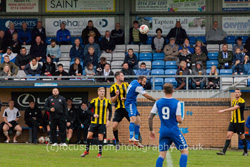 It's back to Senior Cup action on Tuesday night when Houghton Main visit.Without direspecting the opposition will you be giving other members of the excellent squad some game time ?

Yes we will be near enough changing the complete 11 ; as lyou say we have a very good squad and we have some lads that have been knocking on my door asking to play- so they will get theirchance Tuesday evening.

Lastly another brilliant crowd today.Just say a word or two about what the support means to the players?

Our support has been fantastic and the lads really do appreciate it.

Up the Hallam and let’s hope we can keep this run going.

Stephen Whitehead was talking to the Hallam FC Website.