Historic Day At Sandygate As Hallam Are Crowned NCEL Division One Champions! 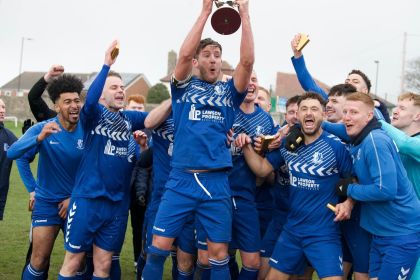 On a day the likes of which probably haven’t been witnessed in living memory, 1179 supporters made their way into the World’s Oldest Football Ground on a day of footballing celebration. Hallam FC had already just about guaranteed promotion from NCEL Division One as champions, barring a highly improbable mathematical disaster, and so this game was a chance for everyone connected with the club to let their hair down and celebrate.

The opposition was Clipstone FC who, languishing in the relegation zone, arrived with their own battles to fight, and their own reasons to try and upset the Hallam party atmosphere. Pleasant springtime sunshine greeted the kick off, and the Hallam fans were in fine voice, providing unwavering support and atmosphere throughout the game.

Although the official line before the start of the match was ‘just a point will do’, the inescapable assumption at the back of most supporters’ minds was that this should be an easy three points for Hallam against a side struggling at the opposite end of the table. However, any thoughts that Clipstone were simply going to lie down and allow the Hallam juggernaut to roll over them were quickly cast aside when, in the sixth minute, Francis Finneran opened the scoring for the visitors.

Any nerves felt on the pitch did not transfer to the stands, and the Hallam supporters continued to lend superb support to their team, urging them on. As the half progressed, Hallam gained the upper hand and began to stamp their authority on the game. In the 24th minute, Hallam’s efforts were rewarded when a free kick on the edge of the Clipstone area was headed home by Bradley Morton.

Hallam continued to press for a second goal before halftime, but their efforts were met by gallant Clipstone defending and a goalkeeper at the top of his game, Charlie Preston making a string of fine saves throughout the match – although he did rather blot his copy book when, in the 33rd minute, he seemed to make something of a meal of a coming together with a Hallam player, his theatrics earning him a booking, much to the delight of the boisterous supporters in Sandygate’s famous Shed End!

The second half began in much the same vein – Hallam dominating play, pushing for a winning goal, to be met by goalkeeping heroics. But the Countrymen were not to be denied, and in the 75th minute, a rare fumble by the Clipstone ‘keeper allowed Hallam favourite Chris Wood to poke home, sparking delirious celebrations from the home fans.

The final 15 minutes were dominated by the Hallam supporters’ high spirited singing and celebrations, and when the final whistle was blown, the Countrymen were officially crowned champions of NCEL Division One and can look forward to playing in the Premier Division next season. In a surreal twist to events, as Hallam were being awarded the Division One trophy, a sudden snowstorm appeared from nowhere, turning the scene into a wonderful, bizarre footballing snowglobe!

The celebrations, both on and off the pitch, carried on long into the night. Scenes that will live long in the memories of all who were there to witness them, and stories that will become Hallam FC folklore in the decades to come. Huge congratulations to Hallam manager Craig Denton, the players and backroom staff, the committee and chairman, the volunteers and the fans, all of whom worked so hard together to make this season such an enjoyable and successful one. Onwards!

Many thanks to Antony at focussingonphotography.co.uk for some of the matchday photos! 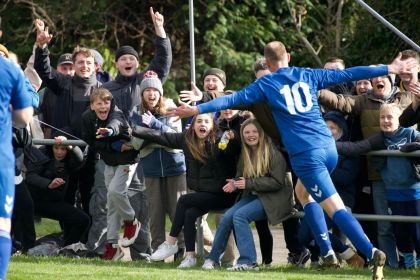 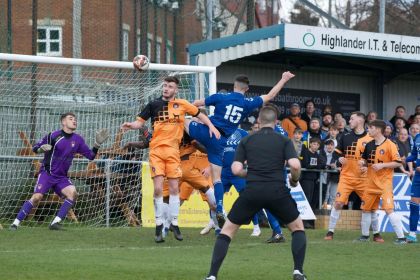 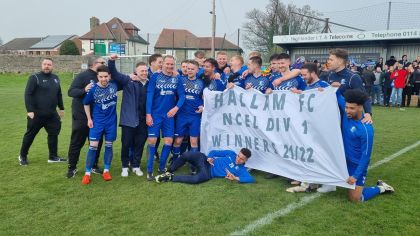 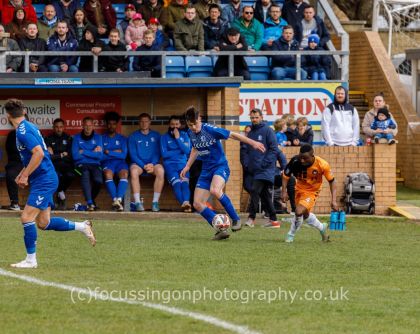 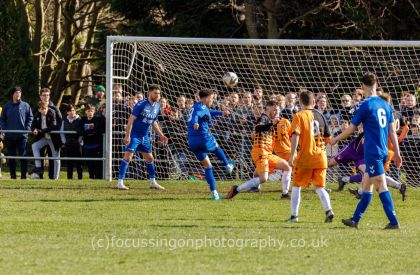 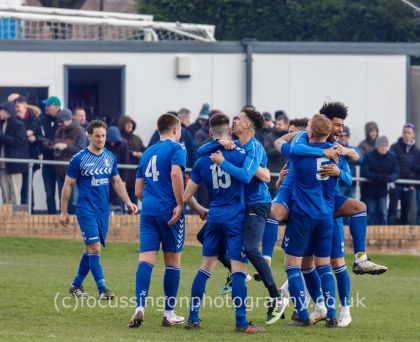 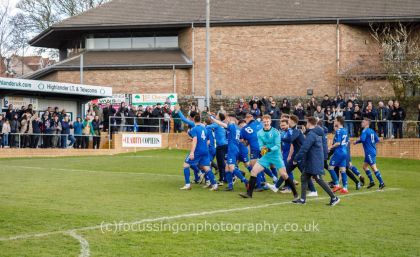 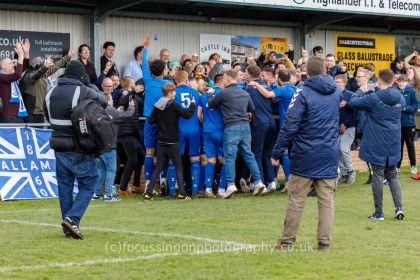 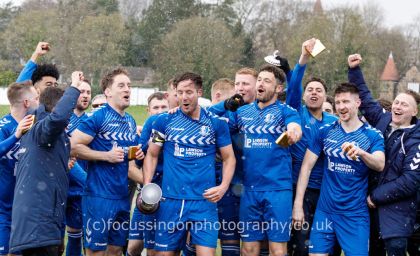