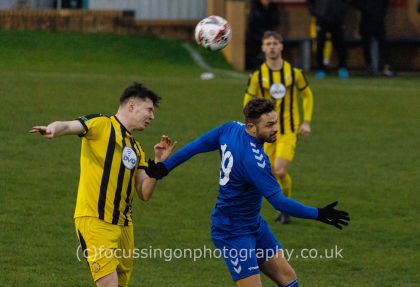 On a blustery and wet Saturday afternoon, Hallam welcomed Nostell Miners Welfare to the Oldest Football Ground in the World. The frightful weather was not enough to deter the Sandygate faithful, and an impressive crowd of 404 made their way through the gate.

Just five minutes after kick-off it was Hallam who almost opened the scoring when Chris Wood’s header crashed back off the crossbar. Kieren Watson was on-hand to head the ball into the back of the Nostell net, but the away team’s goalkeeper pulled off a remarkable save to somehow deny Hallam’s goal-scoring machine!

On the 16th minute a Hallam defensive error allowed Nostell’s Hawkhead to open the scoring, and after starting brightly, Hallam found themselves a goal down. But Hallam kept on pushing, and almost equalised in the 27th minute when Kieren Watson’s shot hit the crossbar once more. Any nagging thoughts that it was going to be ‘one of those days’ for the Countrymen were soon allayed when Iren Wilson’s penetrating run and shot was parried away by the Nostell ‘keeper. The ball fell to Watson who made no mistake this time, and on 36 minutes Hallam were level.

Mere minutes later, and on the stroke of halftime, Watson popped up again to claim his second of the afternoon. As the referee blew his whistle to bring an end to the opening 45 minutes, it was Hallam who headed off the pitch with a 2-1 advantage.

The second half had barely begun when Nostell’s Bruno Bagi was given a straight red card for an awful challenge on Hallam’s Brandon Bradbury. As the rain began to pour down, the Welfare found themselves reduced to ten men and a full 45 minutes of football stretching out before them.

Hallam made no mistake in making the one man advantage pay. Another dazzling run from Iren Wilson saw him chip the rushing ‘keeper for Hallam’s third, and just five minutes later a long throw into the Nostell box caused all kinds of problems for the defence and it was Watson (of course!) who was on-hand to head the ball home, scoring Hallam’s fourth and his third of the game.

On 81 minutes, some poor defending by Nostell allowed Liam Royles to add his name to the scoresheet. The weather was worsening and things were looking equally bleak for the away team. The deteriorating conditions could not however dampen the spirits of the Hallam supporters who, buoyed on by their team’s performance, remained vocal and in good spirits throughout!

On 80 minutes Liam Royles received a knock and, by necessity, was replaced on the pitch by substitute goalkeeper Sam Ogden, playing outfield for the first time for Hallam. And in true Roy of the Rovers style, the goalkeeper became goal-scorer when his speculative shot, on the 89th minute, found the back of the net. His celebration following the goal was equally impressive and showed how much the goal meant to him!

When the final whistle was blown at a wet, windy, and dark Sandygate, it was Hallam who ran out very comfortable 6-1 winners. With league leaders North Ferriby dropping points at home to Shirebrook Town, Hallam remain in second place, now just three points away from the top spot.

Many thanks to Antony of focussingonphotography.co.uk for the photos! 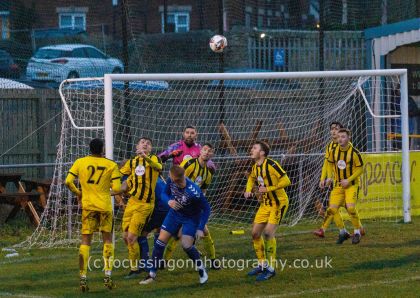 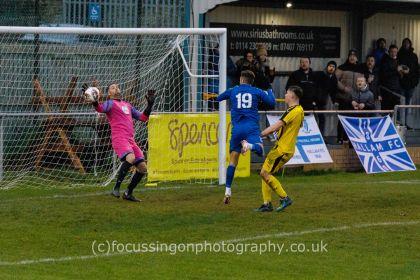 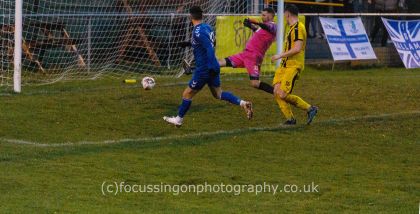