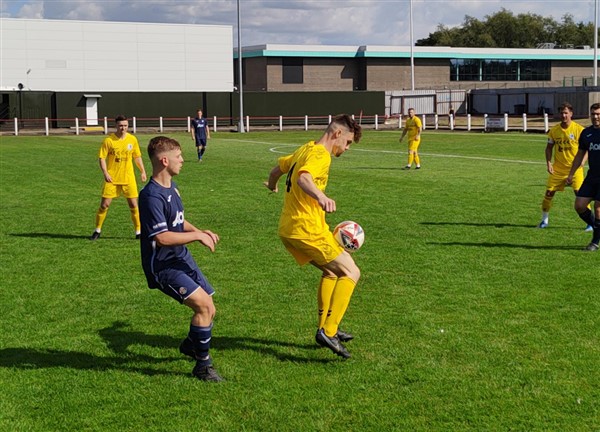 On a wonderful sunny August day Hallam FC travelled to the FPH Stadium, the home of Selby FC to play FC Humber (who are currently ground sharing). Hallam, playing in their yellow away kit were slow to get a rhythm into their game and after 15 minutes of play it was FC Humber who took the initiative. The Hallam keeper Walker picked up the ball following an adjudged back pass and the resulting indirect freekick was fired into the top left corner of Walkers goal 1-0.

Just past the 30-minute mark, Hallam played the ball forward to Iren Wilson who was free and running on to the Humber goal, the chasing defender cut across and brought Wilson down just outside the penalty area, being the last man, the defender was given a straight red and off for an early shower.

Hallam, with the man advantage started to push and seek out the equaliser, during an attack on the right wing on the 45th minute Lian Royals shot was deflected past the Humber keeper to square up the match 1-1. In traditional Hallam FC style they then snatched a quick second goal, it was Iren Wilson who, one on one with the keeper rounded the keeper and slotted it in to give Hallam the lead at half-time 1-2.

Having seen Hallam score seven second half goals on Tuesday evening against Hall Road Rangers, you would not expect them to do that again – would you?

Five minutes into the second half Brandon Bradbury knocks in Hallam’s third from close range following a cross drilled in from Lian Royals 1-3.

Five minutes later Bradbury adds a second from a well taken shot from outside the FC Humber penalty box 1-4. FC Humber then pulled one back catching Hallam on the break and the ball slotted past Walker to reduce the margin 2-4. At this point Humber had a renewed energy and was looking for a third following a good passage of play.

Danny Deakin, who was having an outstanding 2nd Half, hit the post following a great run down the left wing, winding in and out of the FC Humber back line. It was Bradbury who found the net a few minutes later to bag his hat-trick and give Hallam a commanding lead. 2-5.

In the 70th minute, Hallam made a change and brought on Chris Wood for Iren Wilson; Wood quickly introduced himself to the game and made it Six for Hallam heading in with his first touch of the game 2-6, With his very next touch he made it seven for Hallam 2-7, it is of note that his third touch did not result in a goal which came as disappointment of the travelling Countrymen.

Brandon Bradbury was clearly not content with his Hat-trick and added a fourth to his tally following a great move and a blocked shot. 2-8

In the 81st minute Hallam won a corner which was whipped in and toe volleyed into the goal by Julian Lawrence (Lawrence then celebrated with a Ronaldo’esk jump and stance) 2-9.

The Humber keeper did then pull off a couple of good saves to prevent Hallam reaching double figures and the game was brought to a close by the match officials.

Next game is Retford FC on Tuesday at Sandygate – anyone betting for another 7 for Hallam in the second half?