The Hound Pounces, Dr Watson Grabs a Brace, and it's Elementary for Hallam! 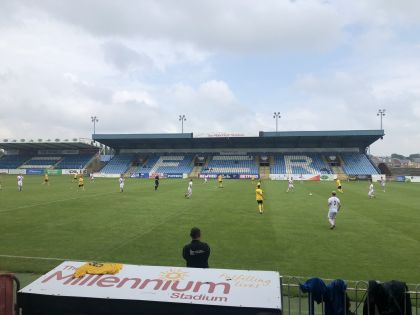 A warm, Saturday afternoon saw Hallam FC make the trip to the Millennium Stadium in Featherstone for a pre-season friendly against newly-formed but highly ambitious Wakefield AFC. Playing in the iconic Featherstone Rovers rugby league stadium, the crowd of 225 (including a healthy following of Hallam FC supporters) were treated to a highly competitive game.

The opening ten minutes saw both sides pressing, but with few opportunities presenting themselves.

However in the 11th minute it was Wakefield who opened the scoring. The home side's goal appeared to inject an urgency into the Hallam players, and on the 24th minute it seemed that an equalising goal had been scored, only for it to be ruled out for offside. Hallam weren't to be denied though, and just four minutes later Hallam got their deserved goal when Baskerville pounced on an opportunity and found the back of the net.

Wakefield almost replied instantly, a good effort coming back off the bar in the 30th minute, and eight minutes later a spell of pressure from the home team saw them take the lead once more. With half-time looming, it looked as though Wakefield would be heading into the break with the lead. However Hallam's predatory goal-machine Kieren Watson had other ideas, and levelled the scores at 2 – 2 right on the stroke of half-time.

The start of the second half saw Hallam make good use of their substitutes in this pre-season friendly, bringing on Wood, Wilson, Woolley, and Bradbury. These changes seemed to give Hallam the edge, and they dominated the second half with the Wakefield 'keeper making a string of good saves. In the 75th minute, the always dangerous Iren Wilson thought he had scored Hallam's third goal, only for it to be judged off-side. Wilson continued to torment the Wakefield defence, and his efforts were rewarded in the 84th minute when he was fouled in the box and a penalty awarded. Kieren Watson stepped up to take the penalty kick and there was never any doubt in the outcome. 3 – 2 to the Hallam.

Five minutes later it was all over and it was the travelling Hallam fans who went away the happier, although both sets of supporters had been treated to commendable performances from both teams.