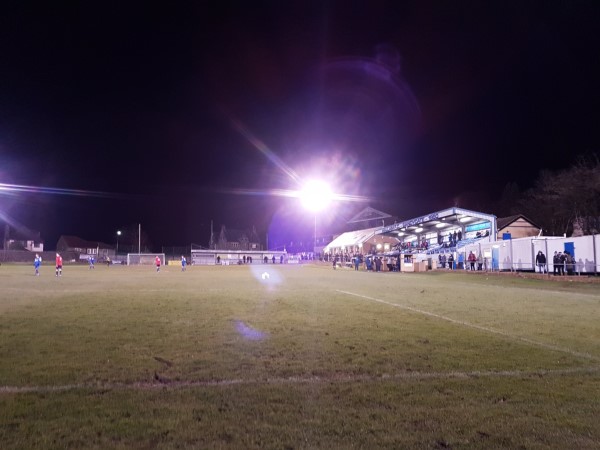 Hallam’s Joint Managers Stephen Whitehead and Ryan Hindley brought Reece Treasure into the starting eleven alongside regular front men Sam Smith and Jordan Turner in an attacking-looking line-up, and there was a place on the bench for striker Alex Rippon, signed earlier in the week from Parkgate.

The kick-off was preceded by a minute’s silence in tribute to the late Jordan Sinnott who died tragically at the weekend (left).

The pitch was heavy and a cold wind blew across S10 as the home side attacked the Plough End in the first half in front of another excellent crowd of 152.It was the visitors, however, who had the first real opening on twelve minutes when Tyla Bell fired over from a great position in front of goal.

After half an hour of relatively few goalscoring opportunities, however, Hallam striker Jordan Turner was given a straight red card for a dreadful late challenge on Main’s Jordan Buckham, who had to be carried off. There was little argument about Referee Matthew Malton’s decision, but it was a serious setback for the hosts as Rossington had defended well to that point. Bailey Conway deputised for Buckham.

The incident turned out to be Turner’s last contribution to Hallam’s season.

Hallam went close through Treasure and Tom Wilson, but half time arrived with the game goalless.

The home side started the second half on the front foot, with Treasure going close, and two free kicks comfortably saved by Main goalkeeper Jan Budtz, and on 55 minutes a frantic goalmouth scramble saw Leverton tip the ball onto the bar as Rossington threatened.

On the hour mark, however, Rossington took the lead in controversial circumstances when Hallam goalkeeper James Leverton collided with Adam Watson who was bearing down on goal. Referee Malton pointed to the spot immediately; and although many in the ground felt the incident was accidental and/or outside the area, the only person who mattered awarded a spot kick despite being surrounded by players from both sides.

Niall Doran -who had been excellent in midfield for the visitors-had a long wait whilst Leverton received treatment, but when the incident had settled down, he stepped up to send the Hallam keeper the wrong way with a penalty low to Leverton’s left. 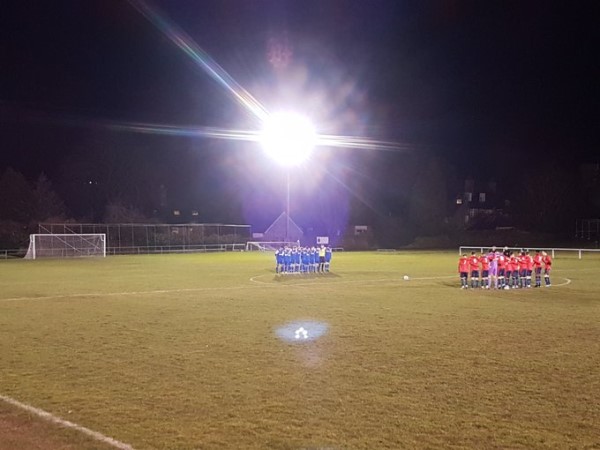 Hallam thought that they had got back on terms almost immediately, when Sam Smith finished brilliantly from a lovely through pass, but the far side assistant flagged for offside. It was a tight call which many in the ground thought to be borderline at best, but the goal was chalked off. In the aftermath, Tom Wilson was sin-binned for dissent, leaving the hosts with ten men for ten minutes.

By the time the game had entered the last quarter of an hour, Stephen and Ryan had thrown on Callum Greaves, Will Wraith and Rippon in search of an equaliser, but with just a minute left, and perhaps inevitably, Hallam were caught on the break and Zephaniah Thomas finished with a fine left foot drive across James Leverton.

Hallam’s obvious frustration got the better of them at this point, and beleaguered referee Malton showed further sin bin cards to Tyler Bradley and Sam Smith for dissent. Added time ran out to confirm a crucial three points for Rossington and see Hallam’s fine five-game unbeaten run hit a bump in the road.

Hallam’s season continues Saturday with unfinished business at Worsbrough Bridge Athletic in the re-run of the game abandoned due to floodlight failure earlier in the season, whilst Rossington head to Nostell Miners Welfare. Both fixtures kick-off at 3 pm.

After the game, Ian and John caught up with Joint Managers Ryan Hindley and Stephen Whitehead.

Stephen and Ryan, although it was disappointing night all round is it fair to say that the result turned on a needless red card and on the penalty decision and how did you see both in incidents?

Stephen Jordan’s red card has killed us after 20 minutes and he’s accountable. We’re up against it for 70 minutes being down to 10 men. The lad hasn’t even got the decency to come in to the half time or full time debrief, so he leaves our club and we wish him all the best.

Ryan Firstly regardless of the Red card we didn’t do enough to win the game. The lads worked hard, and I feel we maybe just ran out of steam from the last two performances. We must improve our discipline as you always stand a better chance with 11 players. The needless sinbins need to stop as well. I though overall it was a poor game.

It’s not a penalty but that’s what happens when the men in the middle and on the side-lines have what I thought was a poor night.

Sum up the performance as a whole; what did you think was missing after two decent performances; and what can you take away from the ninety minutes?

Stephen Going down to 10 men so early you will always have an uphill battle. We need to be more disciplined which we have made clear in the changing room and we won’t be having people being sin- binned; it won’t happen while I’m here. Saying that, the officials make it hard and in the two games that we have had the lead in the middle there has been nothing but controversy. Simple stuff he gets wrong then he fabricated what’s happened. He needs another pastime if you ask me. If I get that much wrong at my job, the fact is I don’t get employed again.

Ryan We didn’t look like scoring, we didn’t create, but defended well; we look a good solid outfit, but we need to start creating more, as we can’t expect people to defend for 90 minutes.

It's Worsbrough Bridge away on Saturday in a re-run of the earlier abandoned game. What are you expecting at Park Road?

Stephen Start with us 4-0 up; play from 53 minutes onwards and see what the result is at 90; don’t replay the lot and if Worsborough had anything about them then they would agree to the same.

Ryan Another tough place to go, although we should be starting the game 4-0 with 20 to play. It’s not happened so we must start on the front foot, we must make up for a needless defeat and put ourselves back in the mix.

Ryan Hindley and Stephen Whitehead were talking to www.hallamfc.co.uk