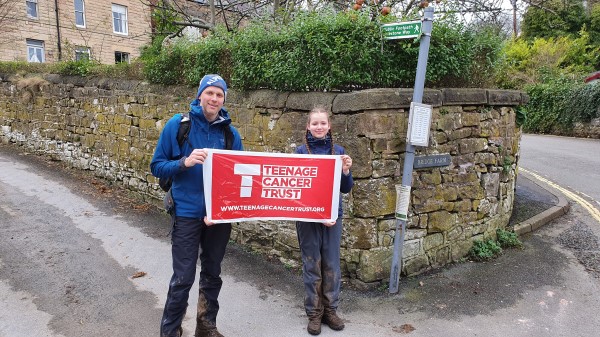 Brave Emily -with Dad in tow-raises over £1200 for the Teenage Cancer Trust.

You may have seen in a recent match programme-and here at www.hallamfc.co.uk- that some of our supporters have been raising money for the Teenage Cancer Trust. Emily Burdett and her dad James (Joe’s family @hallamites) walked 26 miles of the Limestone Way over 3 days at half term, from Castleton to Matlock. At the time of writing they have raised an amazing £1211.34!

They had to delay the walk a few days due to Storm Dennis, but the weather was still pretty dodgy as Emily and James set off on the following Thursday, with hail blowing horizontally in strong, cold winds. The first day involved an 8 mile walk to Millers Dale, but as James says, ‘thankfully the weather improved as we walked, with the main difficulty being flooded and swamp-like footpaths. This slowed us down and we had to run for the bus into Buxton, which we made by about 5 seconds!”

Day two was a 12 mile walk to Youlgreave. ‘The weather was shocking as we got the bus to Millers Dale, but amazingly it stopped as we started the walk and didn’t rain till we were nearly at the end”, says Emily. It was Emily’s first multi-day hike, and she did ”really well” according to her dad. “The boost of all that sponsorship gave her a lot of motivation, especially when we saw it had gone over £1000.”

After a night at the George in Youlgreave, day three was the last 8.5 miles over to Matlock. Emily and her dad managed this ok, although some muddy paths made it hard work at times. “Dropping down into Matlock was great through, with Joe and Mum waiting at the end with a red finishing line”, says Dad.

Emily wants to thank everyone at Hallam FC for supporting her efforts, and to those who sponsored her. It’s not too late either – you can still donate at www.justgiving.com/fundraising/limestoneway