As a New Year starts we look back over 2017 and the Up and the Downs with Glenn Poulton.

As ever in the NCEL, 2017 didn't disappoint, especially with hallam FC on the back of 1 play off finish in 2016. A cold January saw Hallam kick off the year with a 4-0 home win over Brigg and a strong 210 crowd.

League defeats to Hall Road Ranger and Rossington Main were easily swept under the carpet with an early shout for result of the year when in the NCEL league cup fourth round, we were 1-0 down to Handsworth Parramore and with less than a few seconds on the clock Matty Ord sent the travelling Countrymen in to raptures and with only 5 minutes left of extra time, Connor Chapell scored a winner to send Hallam into round 5 instead of the NCEL Premier side. 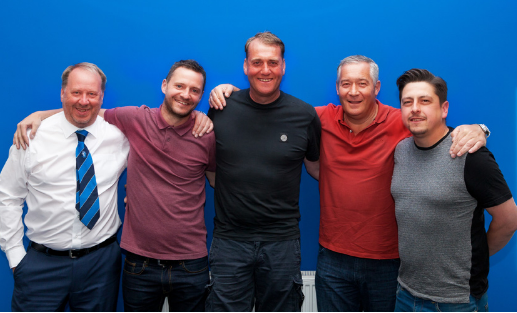 With the play offs still well and truly in sight for a 2nd year running, 6 league games in February came as a bonus to get keep the pressure up on the top lot. A 9-1 away win at Worsbrough bridge with 5 goals for Jake Currie being the stand out moment. The only defeat coming away at top of the table Pontefract Collieries with Hallam's number 1 Dave Darwent seeing an early red card on his 40th birthday. A hard to take exit from the Sheffield and Hallamshire senior cup in the quarter final, a 119th minute goal away at Penistone Church at the end of February ensued. Hallam's 2-2 away draw at Yorkshire Amateurs was a first visit for Me and fellow partner in crime, Mark Redfern to the southerns stadium in West Yorkshire, and a wet 1 at that as the rain poured in.

Another quarter final defeat, this time in the league cup at home to Glasshoughton welfare ended the month of March. 2 wins, 1 draw and a 1-0 away defeat to Selby in the penultimate month of the season, this included 13 goals scored and 7 conceded which proved to be another entertaining month for the Sheffield 10 side. The 5-0 away win at Winterton Rangers being my stand out moment.

April brought a 2-1 win over Shirebrook Town and a 4-0 win against Westella and Willerby at Sandygate Road all but confirmed the play off spot. Another new ground for Mark and Me to tick off this year was Ollerton Town, and Hallam's 3-0 comfortable win confirmed our 5th place finish with 1 game to spare. The regular season ending with a 1-1 draw at Eccleshill. The 1 leg play off semi final match away at Grimsby borough couldn't have got off to a better start as Micheal Blythen putting us 2-0 up at half time with 2 smart finishes. However, the 2nd half was all Grimsby and they got the 3 goals they needed to progress to the final. Gutted and deflated 2 seasons running, a real shame after a year to be proud of.

The summer brought change for Hallam FC, and that includes me being taken up on my offer to help out where I can, which I've covered in recent issues of this magazine. I can't mention enough about being voted on to the committee is a real honour! On field matters it was all change with captain, Scott Bates and assistant manager Steve Whitehead being appointed to the trio management team along side Dean Bamforth who came in from the coaching staff at Handsworth Parramore. The changes didn't stop their with the players in and out, a too long of a list to mention. About 30+ at a guess with many coming along with Dean from Parramores.

A good pre-season with a home win over premier side Maltby Main and a strong display against Sheffield United in front of a crowd of 550 enjoying the sunshine at Sandygate Road. Our annual dual in the worlds oldest Derby saw Sheffield FC beat us 4-1 to retain the trophy at their place in front of another big crowd of 450.

August started with the FA Cup and 2 home crowds of 300+ for both. A 3-0 home win against AFC Bootle set up a 4-1 defeat to Atherton Collieries and the dream over before end of the month. 4 league games in August brought 2 defeats, a draw and a single win, away at East Yorkshire Carnegie. First half goals from Nathan Forbes and Daniel State was enough to over turn EYC first minute goal and put the first 3 points on the board.

The games came thick and fast in September, 8 in total. Victories over Nostell and Winterton as well as a 1-1 draw away at South Yorkshire rivals Swallownest in the league, sandwiched between a double header against Rossington Main in the FA Vase 2nd qualifying round which ended in defeat after extra time and then a replay. The 1st qualifying round paired up Hallam and Abbey Hey from the other side of the Pennines. 1-1 in the home tie after extra time saw Hallam travel to The Abbey on a Tuesday night for a second attempt and come away with a terrific 1-0 win against the NWCFL Premier league side.

Another 8 games containing 38 goals in the month of October ensured that their was never a dull moment while following the Countrymen. Highlights being the 7-0 home win against Worsbrough Bridge and Mitchell Dunne helping himself to 4 goals inside the first half. Non league day also brought Hallam's biggest league crowd of the year, where 466 watched Brigg Town beaten easily by 5 goals to 1, and Mitchell Dunne helping himself to another 2 goals.

Winter soon came back around but that didn't put a stop to the NCEL season with another 7 games and 24 goals across the board. A 4-0 away win at AFC Emley and a Chris Wood hat trick was a personal favourite away venture for myself with Me, Mark, Frazer and Alfie making the short distance on a Tuesday night and taking up the lovely clubs offer. Entrance to the game, match programme, plus hot food and a drink for just £10 paid in advance, The NCEL at its finest. Hallam progressed in the Sheffield and Hallam senior cup with a 2-1 away win over Denaby United. (An unusual 1, where the game was played at Sandygate Road due to Denaby not having floodlights but with Hallam wearing the away kit). 2 late goals away at Hemsworth in the league cup 2nd round wasn't enough to see us march through as we were already 4-0 down at half time. A very Jekyll and Hyde month of results.

As we roll into the Christmas month, games began to be effected by the weather but the few that have stood the test brought 5 points from a possible 9 including an impressive draw at 2nd in the table Yorkshire Amateurs. However, a less said the better defeat at home to North Gawber Colliery all but ties up a very entertaining 2017 as a Countryman. The last game of the year pitted us up against Against Armthorpe Welfare away. Me and 6 other of my fellow Countrymen and women met in Sheffield city centre for a breakfast and wait for news of if the game was on or off from the snow we'd had in South Yorkshire the night before. News of game on, so the 10:41 train to Doncaster it is. We arrive at the Welfare ground in plenty of time before kick off via several pubs including The Wheatsheaf pub opposite the ground where we met the rest of the travelling Hallam-ites. The games itself was slogged out in wet and windy conditions. An early looping header from Connor Chappel put Hallam 1-0 up at half time and in control of the game. The second half, Armthorpe rallied and with 2 mins left a powerful header from Will Ramsey made it a deserved point each. Things could have been much worse for Hallam if it wasn't for MOTM Dave Darwent making a Gordon Banks-esque save and Richard Tootle clearing off the line, before we all head back for the 18:58 train home, happy with a point to end 2017 with.

9th in the table and 7 points behind the last play off spot leaves it all to play for in the new year. Hallam finished the year with an average of 193 fans coming through the turnstiles, which is only bettered by 1 NCEL side in the Premier division. #Target200 is set for 2018!

Before the year is over I caught up with Hallam manager Scott Bates to sum up things from the managements point of view and his first 6 months in the dug out.... It's been a massive learning curve for me, on and off pitch. On the pitch I'll be honest, I didn’t think we would have gone through so many players but we have always had the nucleus of the team which is a massive plus for a team bonding and a good dressing room, which am a massive fan of having a good dressing room. Everybody knows everyone’s backs covered, I think the lads we have brought in while the season has been up and running have been great signings and will improve us, don’t think we are the finished article yet. I think 1 or 2 More, then the competition for places will be great, the squad looks good at the moment and I am pleased. Hopefully we can have a good 2nd half of the season and push on. Think in your 1st year at anything is a finding out season who’s with you and who aren't, it’s hard to keep everyone happy, but to be successful you need a squad and when called upon you have to take your chance. You don’t win anything with just 11. Off the pitch it has been a real eye opener and I cannot believe how many people give up there time for Hallam, such a tight knit bunch of people, and I am certain their would be no Hallam with out any of them. The chairman and everybody have been 1st class with me, couldn’t do enough for you, an absolute joy to work with. Hopefully we can repay them with our displays.